A Season for Everything

The truck was packed, the van was loaded. With home now in the rearview mirror, Jubilee and her parents began their 800-mile journey back to the Midwest. The move had come quickly, with rushed goodbyes and a wave of emotions, but without a shadow of a doubt, the Lord was working. Their housing was not yet secured, the details of their new life were still unclear, but the Lord’s call to return to Wisconsin was undeniable. I just knew that the Lord was going before us – that was my expectation. And what it looked like, I had no idea, but there was trust. I knew the Lord was there.

Moving to a new home was a familiar transition for Jubilee; continual change had become an expectation throughout her life. Prior to moving back to Wisconsin, North Carolina had been home for 5 years. It was a place of tr

emendous growth for Jubilee, during the most formative years of young adult life. I always picture that season as learning how to become an adult, like growing up there. Those 5 years were filled with exciting milestones and lessons from the Lord as well as beautiful blessings. The gift of friendship and community provided Jubilee and her parents with opportunities for ministry and service. It was also during this time, tucked up in the mountains, that Jubilee began her musical journey, playing the guitar and songwriting. I was starting to know what I was supposed to be doing with my life.

The growth and maturity that characterized Jubilee’s North Carolina life was not wasted, but it also wasn’t a permanent season. Through much prayer, Jubilee and her parents knew the Lord was shifting things and transitioning their lives of ministry out of North Carolina. Still filled with questions but dedicated to prayer, the three traveled back to Wisconsin for a visit. With new doors of ministry opportunities opening and generous support offered, the Lord was making it clear that a new season in Wisconsin was on the horizon. It was incredibly bittersweet because I lived in a place that I loved, that the Lord had allowed to be such a sweet season, but I knew this was where the Lord was calling us to come back to.

The reality of depending on Christ became fresh and alive for Jubilee as she returned to a place she had called home once before. Whether it was returning to past friendships or shopping at the same grocery stores, clinging to the familiar was a subtle temptation. You never expect to come back sometimes, to a place you’ve already been, and I think that was the important thing. I couldn’t walk through it the same way I did when I was here the last time. It’s a different physical location, in the same general area, but we’re not the same anymore. The physical land may have looked the same, but the spiritual growth Jubilee had experienced the past 5 years had matured her in the Lord. 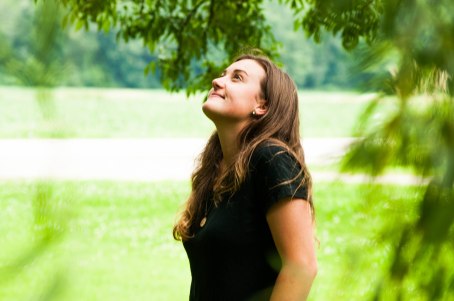 The depth of dependency Christ was leading Jubilee towards involved letting go of what she comfortably understood and allowing God to forge a new path for her and her family, in every area of their lives, including friendships, ministry opportunities, and music pursuits. I knew that the purpose was different this time.“Okay Lord, how do I walk through that, in a familiar place?” – not just trying to go back to what I know but really being intentional about seeking the Lord and walking where He’s asking me now, in a familiar place.

The increase of dependence upon Christ also brought significant character building in relation to her musical journey. God began to show Jubilee that her dependence upon Him was necessary that she may steward her gifts well and for His glory. Rather than just “writing lyrics” or “playing a song,” Jubilee was learning that her talents must be first offered up to the Lord in worship to Him, so that He would remain the foundation of her pursuits and the source she depends upon.

Your dependency on Him never stops … Even as you grow steadier, you continue to see how much you need Him, always … in a really beautiful way.

All published content on this site, unless noted otherwise, is the original work of Christina Crawford. Please do not use my words or images without linking back here! Thank you.